A panel from Love That Bunch, by Aline Kominsky-Crumb. (Courtesy of Drawn and Quarterly)

Thank you for signing up for The Nation’s weekly newsletter.

Thank you for signing up. For more from The Nation, check out our latest issue.

The Nation is reader supported: Chip in $10 or more to help us continue to write about the issues that matter.

Did you know you can support The Nation by drinking wine?

Until she enrolled in the State University of New York at New Platz in 1966, Aline Ricki Goldsmith had lived a dual life: At home in Long Island, she was the thwarted daughter of a bickering, materialistic, and precariously middle-class couple who stifled, she felt, her creative urges. But starting as an early teen, she’d make her way to Greenwich village to partake of the bohemian pleasures, in the form of folk music, boyfriends, and drugs. These experiments in liberation were curtailed by a curfew—and by the iron hand of her father. The one time she brought a Black boyfriend home to Long Island, her father, whom she described as aspiring to the life of gangster without ever making it, pulled out a gun. But moving to New Platz gave the young Goldsmith a chance to plunge headlong into the counterculture.

“I took as many drugs as I could, and I spent days staring into space and getting lost in my head,” she would recall in an autobiographical comic book story, created after she had gone through two marriages and took the name Aline Kominsky-Crumb. “I had so many boyfriends for the first time in my life.… I made love a lot and I had orgasms.”

Within weeks of this embrace of liberation, she ran into an immediate hurdle: She was pregnant. Abortion was still illegal, so she ran away from college and started living in the Lower East Side, without telling her family about the pregnancy. Her father tracked her down and agreed that her plan, to give the child up for adoption, was best. He also agreed that Aline’s mother should never know about the child.

In recounting this episode in comic book form in 1989, Aline Kominsky-Crumb included a curious footnote: “She still doesn’t know & won’t unless she reads this… or you tell her!” That footnote, to me, contains the essence of Kominsky-Crumb’s achievement: She was a cartoonist who would share stories with her audience that she wouldn’t even tell her family—even her mother. It also suggests the contract of trust that Kominsky-Crumb created with her readers: She would be utterly fearless in writing about her life, knowing readers were grown-up enough to handle the truth and wouldn’t tattle on her. 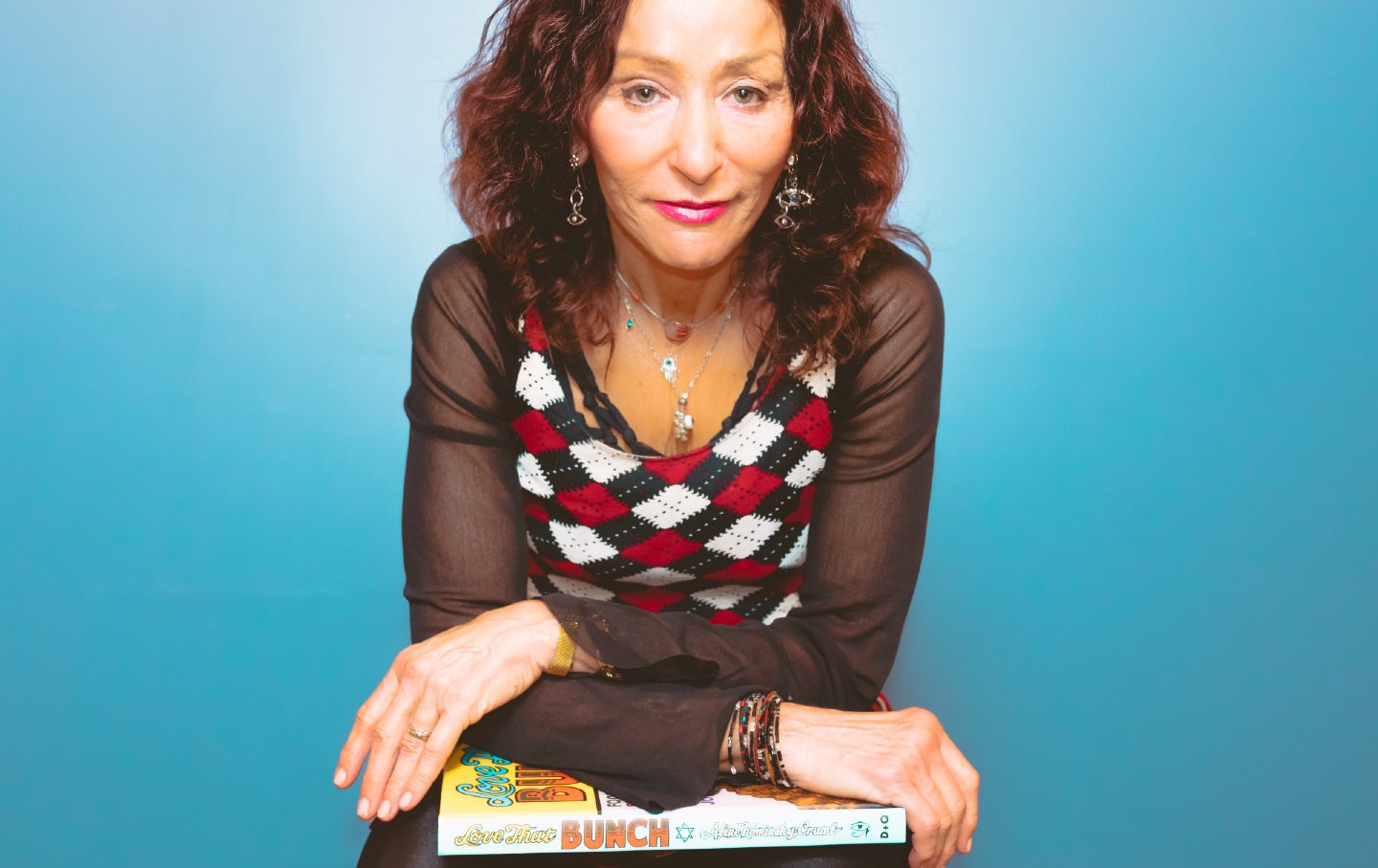 Kominsky-Crumb, who died last Wednesday at age 74 of pancreatic cancer, was one of the most important and influential American cartoonists of the past century. Tributes to Kominsky-Crumb and samples of her work can be found here, here, here, and here. A key member in the generation of underground cartoonists who in the late 1960s and early ’70s brought subversive and transgressive countercultural values to the hitherto restricted world of comics, Kominsky-Crumb managed to be even more shocking than almost any other member of her cohort. The big names of underground cartoonists, including Robert Crumb or S. Clay Wilson, outraged readers with lurid phantasmic and psychedelic images of sex and violence, using a stylized visual vocabulary of traditional comics. Kominsky-Crumb respected these artists (and in 1978 would in fact marry Crumb). But she did work that challenged readers without the fireworks of fantasy.

Rather, Kominsky-Crumb discovered that nothing is more repulsive than everyday life. A laying bare of intimate personal demons and family secrets could produce truly unsettling art. Reading Kominsky-Crumb’s stories about her life (conveniently gathered together in the hefty 2018 collection Love That Bunch), readers encounter a personal history told with uncommon candor. We see scenes not just of her parents fighting, but even an incident where her father raped her mother. Her alienation from suburban America is vividly rendered, as is the story of how she managed to escape a world that led to her permanent traumas for her younger brother, branded a “sissy” by their overbearing parents. Kominsky-Crumb’s art perfectly suited the emotional intensity of her work: It was expressive, exaggerated, and tortured. Her very inner life seemed on display, with each splatter of ink seeming to be taken from her blood rather than a pen.

Her stories aren’t just of a record of trauma, but also of artistic discovery, personal growth, and unlikely triumphs. Her marriage to Crumb was unexpectedly successful, even though her mother, upon first meeting her future son-in-law, said, “Well… there are people that are attracted to retards and even cripples… so I guess it takes all kinds… how else can I explain something like this???”

In fact, Crumb and Kominsky-Crumb were two misfits who were a perfect fit for each other. They had an open marriage, each with multiple lovers, but maintained a domestic space that allowed both to be productive artists. They collaborated on a long-running series of comics about their married life, again unsparing in its honesty. Artistically, they gave each other courage and direction. Crumb’s own work in autobiography owes much to his wife.

Their daughter, Sophie Crumb, also became a cartoonist, and they had a more informal family in the many younger cartoonists they inspired, more than a few of whom appeared in Weirdo, a magazine that Crumb edited from 1981 to 1984, handing the reins to the cartoonists Peter Bagge from 1984 to 1986, who in turn passed control over to Kominsky-Crumb from 1986 to 1991. 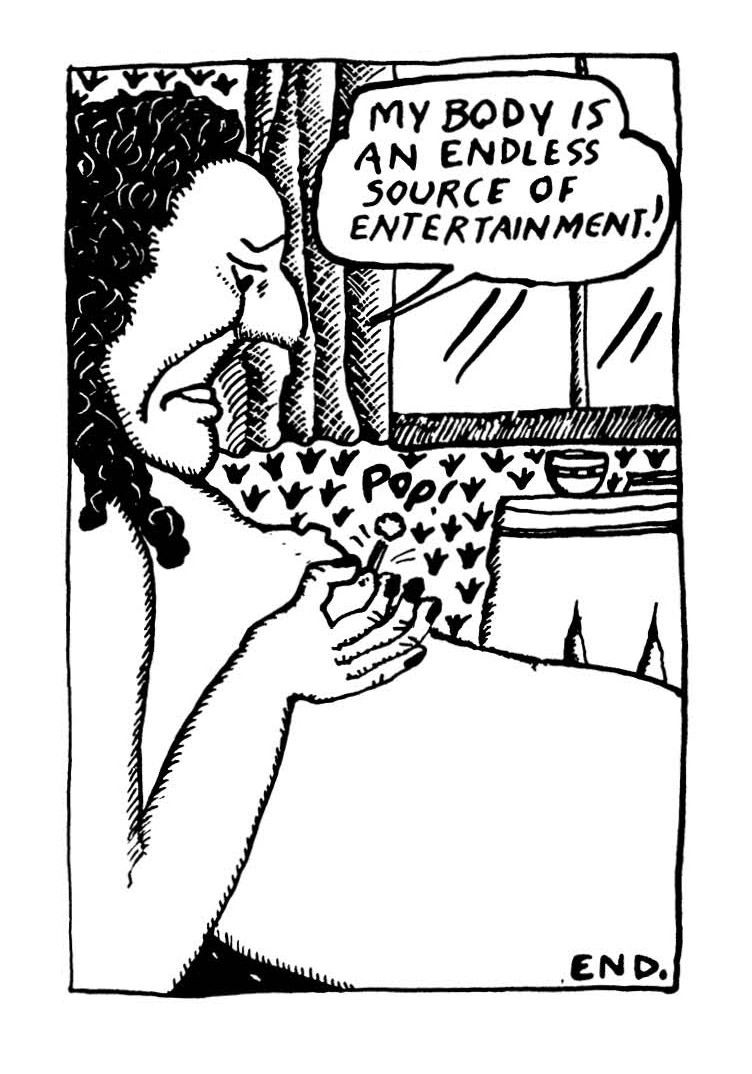 A panel from Love That Bunch, by Aline Kominsky-Crumb. (Courtesy of Drawn and Quarterly)

If the tribe of weirdos had a king and queen, they were Crumb and Kominsky-Crumb. Both separately and in their collaboration, they opened a path for the countless artists now exploring comics as a form of self-expressive and self-exploration.

There were other underground cartoonists who mined the rich vein of autobiography, notably Justin Green, whose Binky Brown Meets the Holy Virgin Mary (1972), a self-lacerating examination of Catholic guilt, helped inspire Kominsky-Crumb’s work. Other fellow travellers in this tradition include Harvey Pekar (whose American Splendour comics are a remarkable record of working-class life in Cleveland) and Diane Noomin (whose DiDi Glitz stories paralleled Kominsky-Crumb’s examinations of gender and Jewishness). Pekar died in 2010. Green and Noomin died earlier this year. With Kominsky-Crumb’s death, this chapter of cultural history has now lost its most important pioneers, although their legacy is more vibrant than ever.

Noomin and Kominsky-Crumb edited Twisted Sisters, an important 1976 anthology of female cartoonists who worked in their mold of self-revelation. They then gathered together these artists and others in a 1991 anthology published by Penguin, which carried a blurb by the singer Madonna. This book was pivotal in breaking autobiographical comics out of the ghetto of underground comics and making the work accessible to a wider audience.

In an e-mail to me, Peggy Burns, the publisher of Drawn and Quarterly, the Canadian firm that keeps Kominsky-Crumb’s work in print, spoke of the importance of the 1991 Twisted Sisters anthology: “For those of us who started reading alternative comics in the 90s, we didn’t buy our comics at head shops like the generation before us, or bookstores like the generation after us, and comic shops were still inhospitable to women for the most part. We bought our comics where we bought our records, stores like Tower Records, Kim’s Video, Amoeba, and Newbury Comics. I have had conversations over the years with female comics professionals around my age such as the academic Hillary Chute, the cartoonist Megan Kelso and others about the effect that the mass market paperback collection of the seminal Twisted Sisters had on us, how we found it at stores such as these, and how it was our first introduction to Aline Kominsky-Crumb. It was this introduction to Aline amongst her female cartooning peers that gave us everything we needed to know.”

You could build fill several bookcases with work by artists who were inspired by Aline Kominsky-Crumb: notably Julie Doucet, Lynda Barry, Mimi Pond, Vanessa Davis, and Rina Ayuyang. In an e-mail to me, Davis wrote, “Aline was the prototype. She showed us how to be fearless and gleeful in work and in life.” Lynda Barry echoed these sentiments: “Her work was the first I’d ever seen that looked just like I felt as a young teen: Gnarly, intensely female but not pretty, boy-crazy and hilarious but serious and deep. Her work went straight into my 14-year-old soul and has been there ever since.”