House Speaker Nancy Pelosi has been booed on stage during a surprise appearance at a New York City climate change music festival.

As the House Speaker discussed plans in Congress to cut carbon emissions, members of the audience could be heard booing Pelosi.

‘It’s Nancy Pelosi,’ one audience member recording the incident could be heard saying, surprised to see the US representative there. ‘Why is everyone booing?’

Prior to her appearance on stage, many eyes were on the House Speaker as she met with celebrities in one of her first major public outings following Paul’s drunk driving conviction. 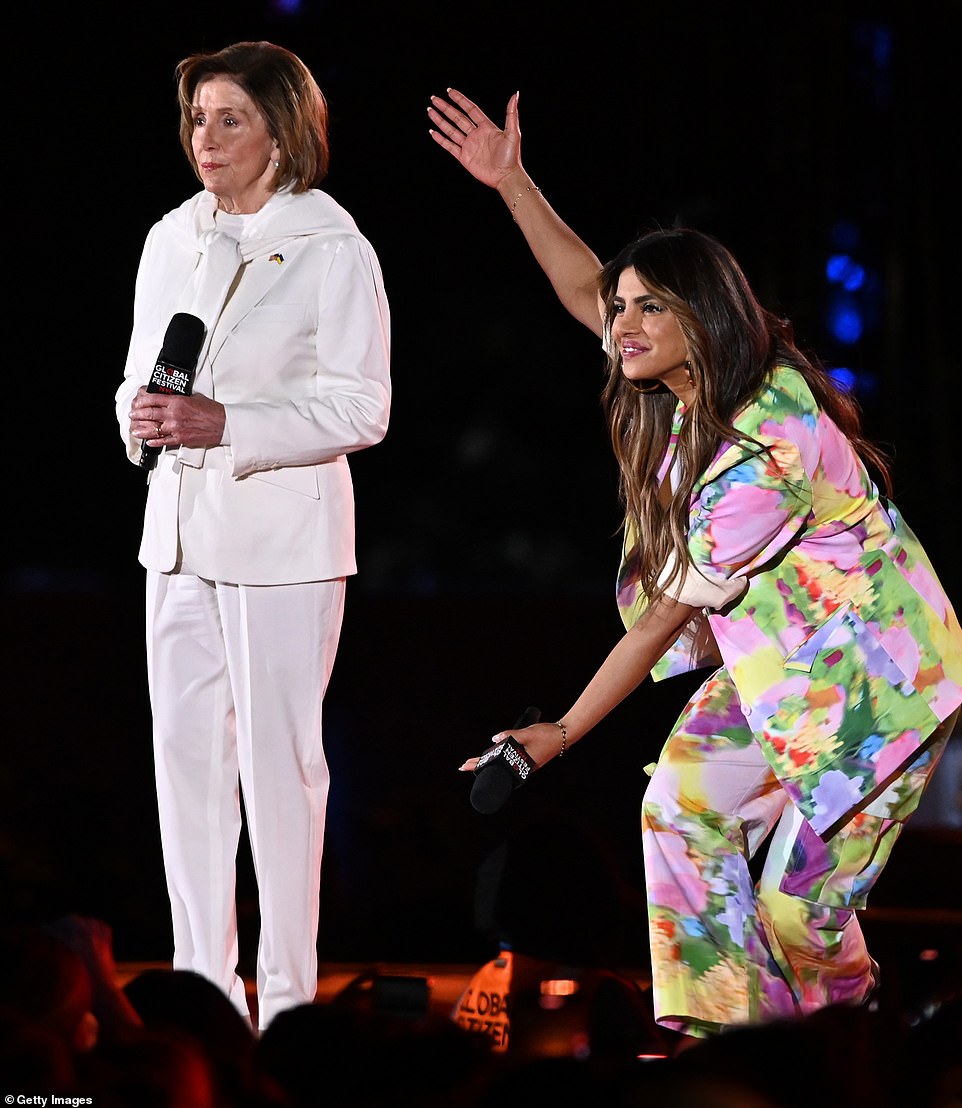 US House Speaker Nancy Pelosi (left) was booed on stage at the Global Citizens Festival on Saturday night after being introduced  by Indian actress Priyanka Chopra Jonas (right), wife of singer Nick Jonas 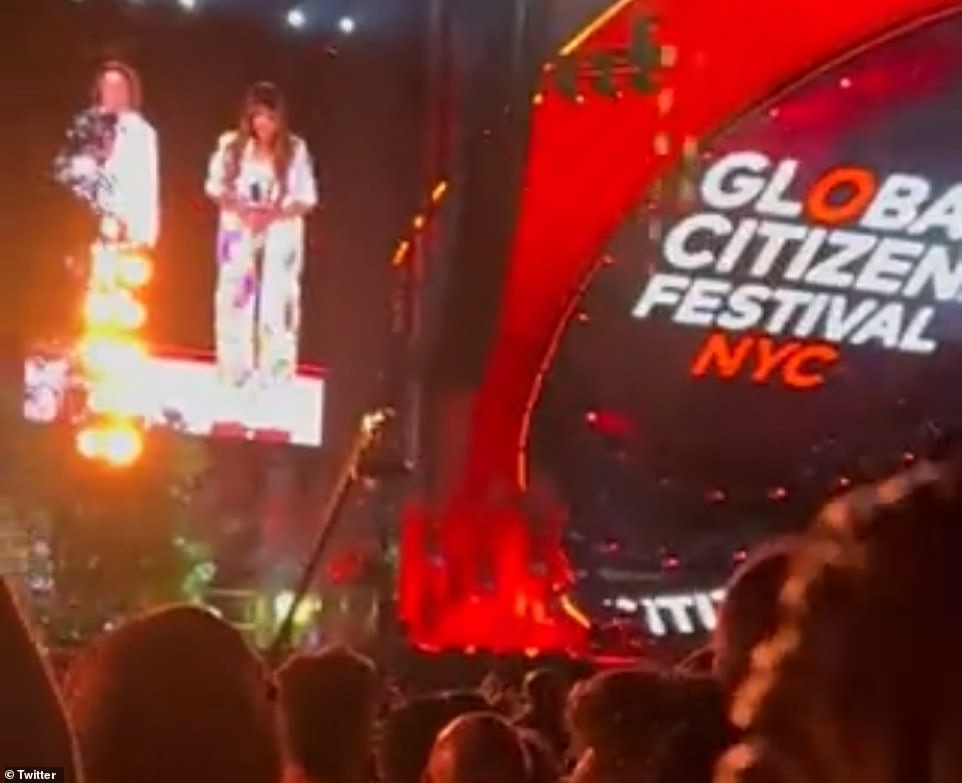 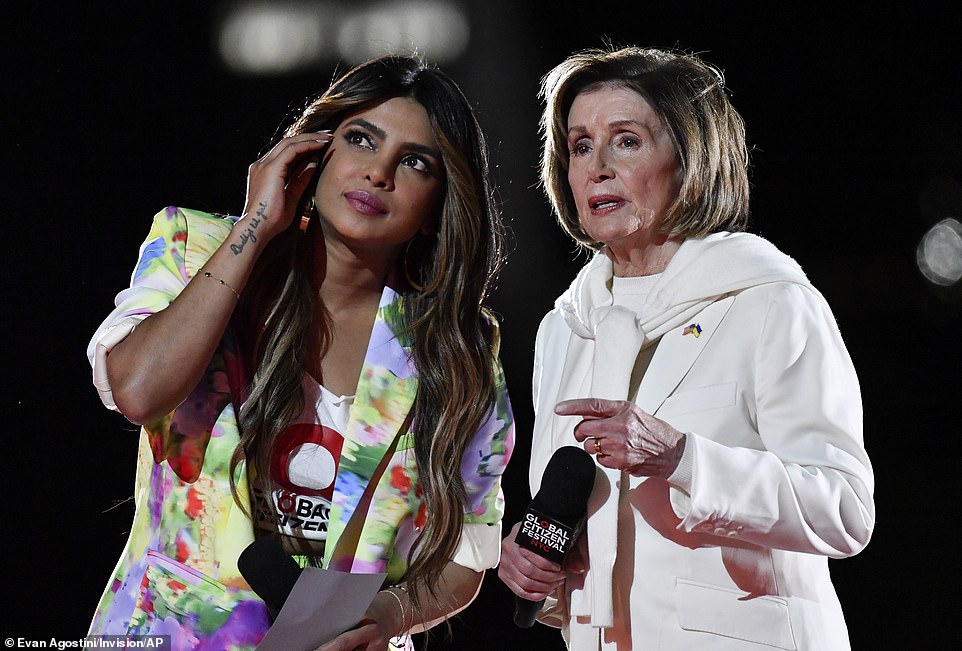 Appearing to take cues from the booing crowd, Pelosi agreed to keep her comments short and moved on 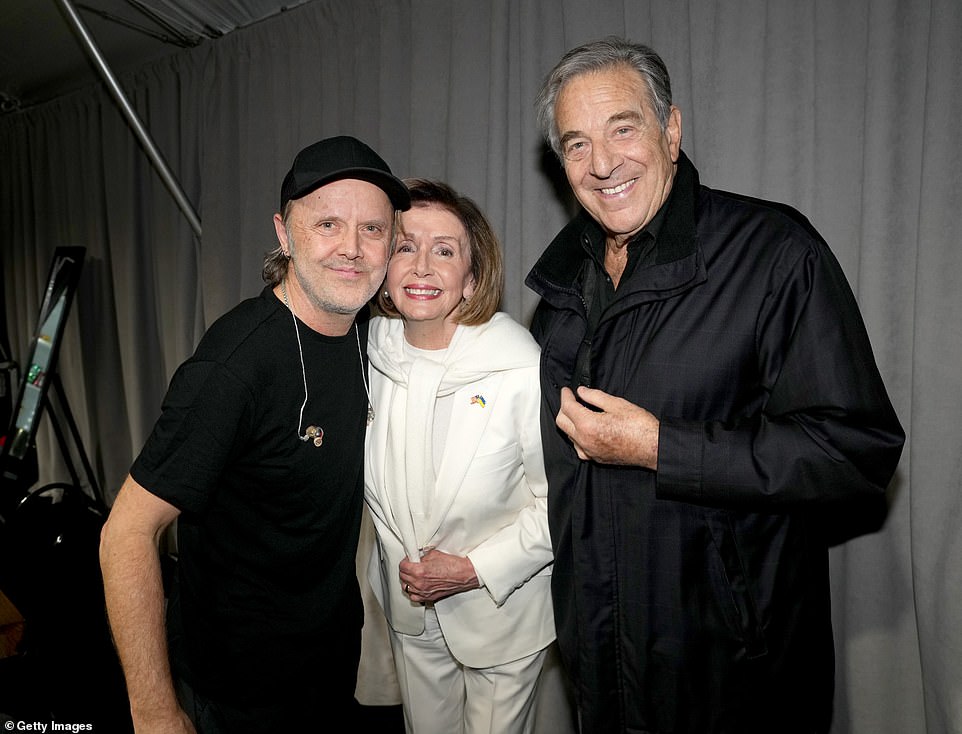 Amid the jeers, Pelosi could be heard trying to thank the crowd for coming out in support of the environment as she touted America’s latest plan to cut carbon pollution by 40% by 2030.

‘As speaker of the house, I am here to thank you for your dazzling advocacy, entrepreneurial thinking, and determination as global citizens,’ she said.

‘It’s thanks to your help that the United States recently enacted historic climate legislation, which will be a game changer,’ Pelosi said through the boos. ‘It will slash carbon pollution by 40 percent by 2030, it will give a historic, a historic $370 billion to fight the climate crisis.’

Appearing as though she understood the crowds’ mixed reaction to her, Pelosi agreed to keep her remarks short and allow the concert to continue.

‘Let’s go,’ several hecklers were heard yelling as the Democrat left the stage.

While the crowd at the festival seemed disinterested in Pelosi’s appearance, her surprise guest spot did garner a lot of attention for different reasons.

Saturday’s event was one of the first public outings for the Pelosis since Paul, 82, was sentenced last month to three days in a California jail for crashing his Porsche while over-the- limit. 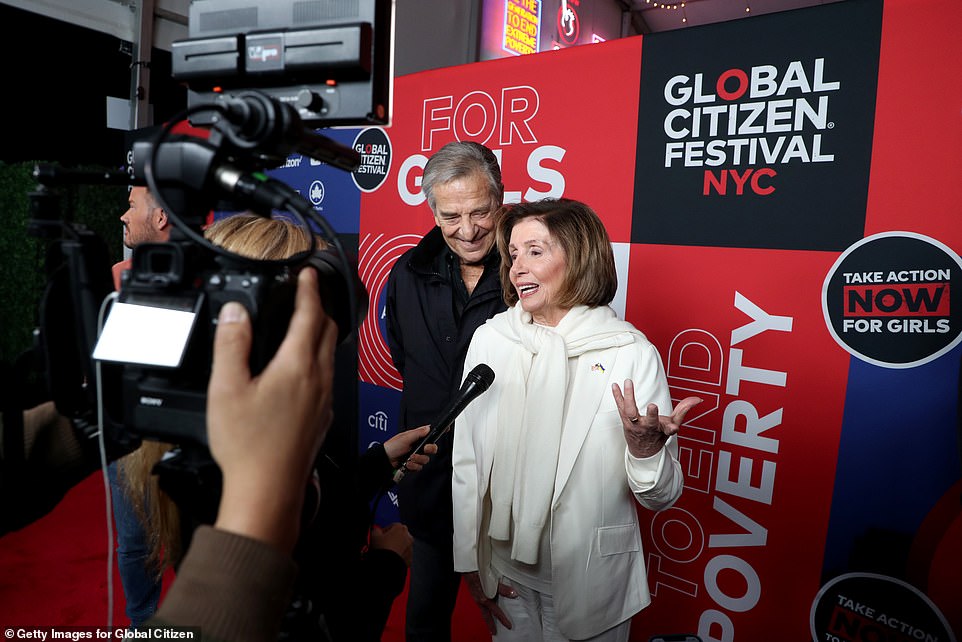 Prior to her appearance on stage, many eyes were on the House Speaker as it was one of her first major public outings after her husband, Paul’s, drunk driving conviction 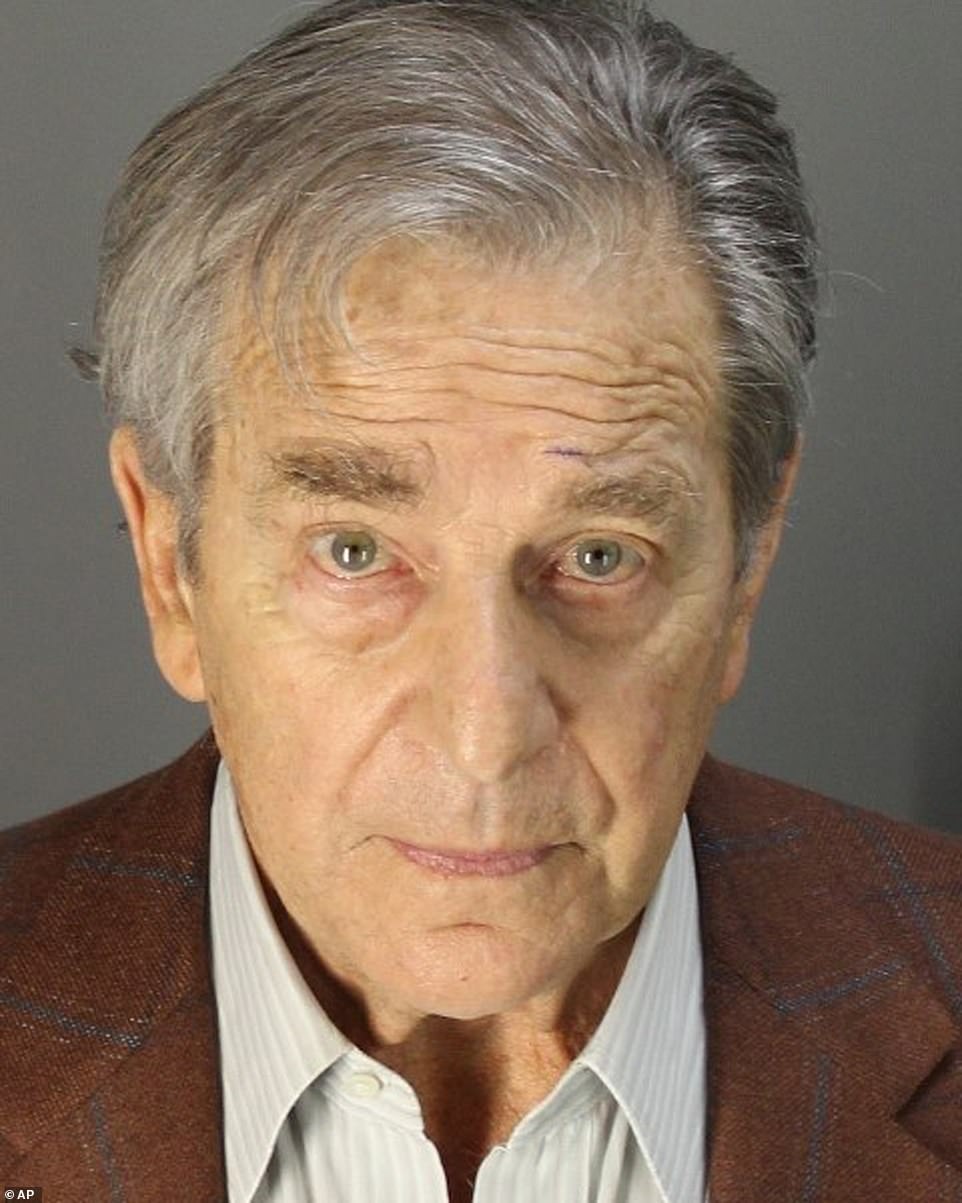 Paul Pelosi was slurring his words and reeked of alcohol when he was picked up by cops after crashing his Porsche on May 28. He is pictured in his booking photo

Paul was arrested in Napa Valley on May 28 after he ran a stop sign in his 2021 Porsche and slammed into a Jeep shortly after 10 p.m. following a boozy dinner.

He then failed a field sobriety test and had a blood alcohol count of 0.08 percent.

Paul was also found to have traces of drugs in his system, was slurring his words and reeked of alcohol when he was picked up by cops.

Despite his crimes, he hasn’t been banned from driving, and will instead be forced to fit a special device to his car that’ll make him take a breath test before its ignition starts.

Officers said he was sitting in the front seat of the car, failed a field sobriety test and his eyes appeared ‘red and watery.’

‘He was unsteady on his feet, his speech was slurred and he had a strong odor of an alcoholic beverage emanating from his breath,’ the arrest report noted. 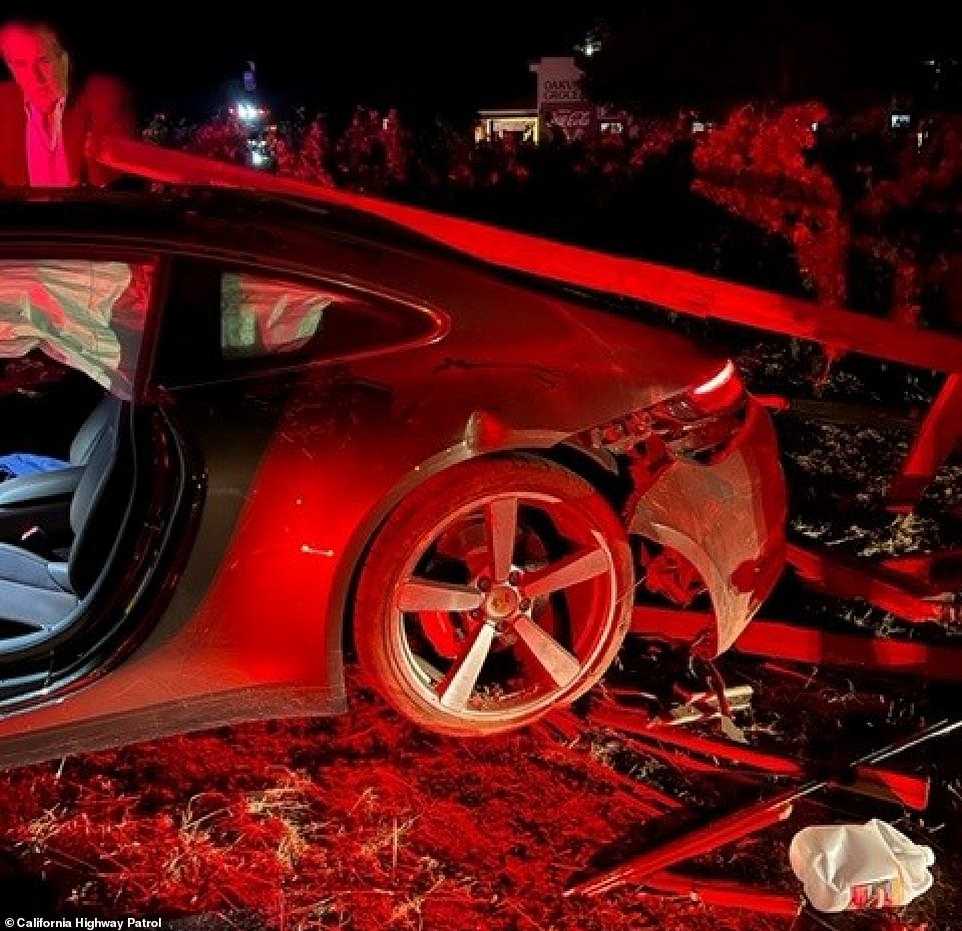 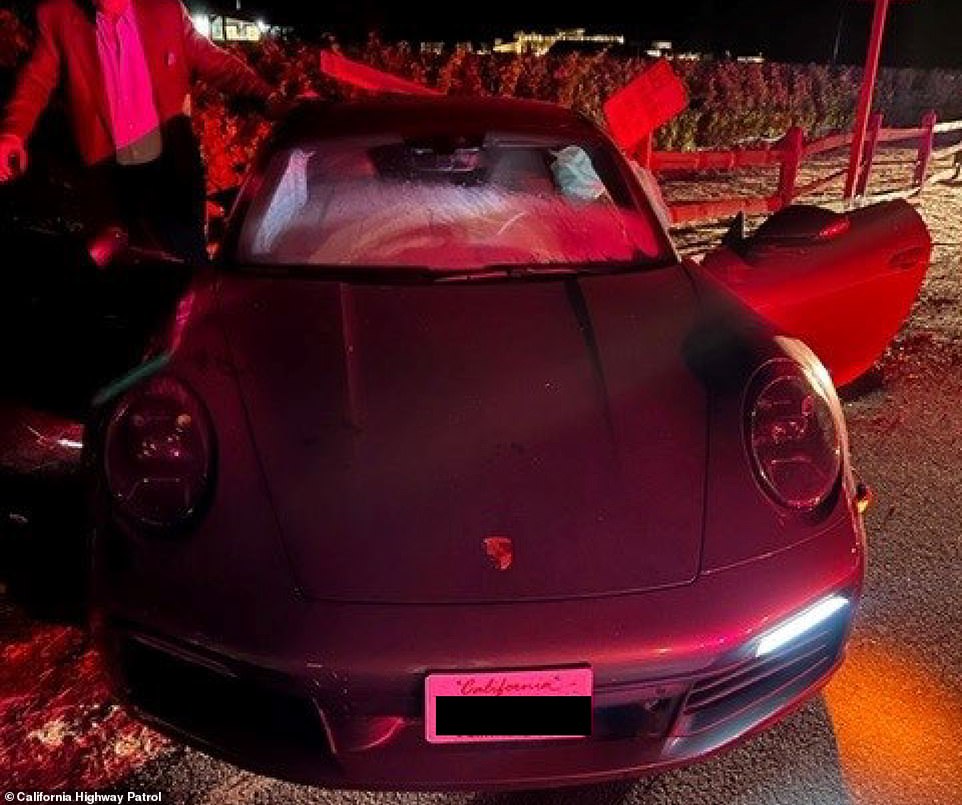 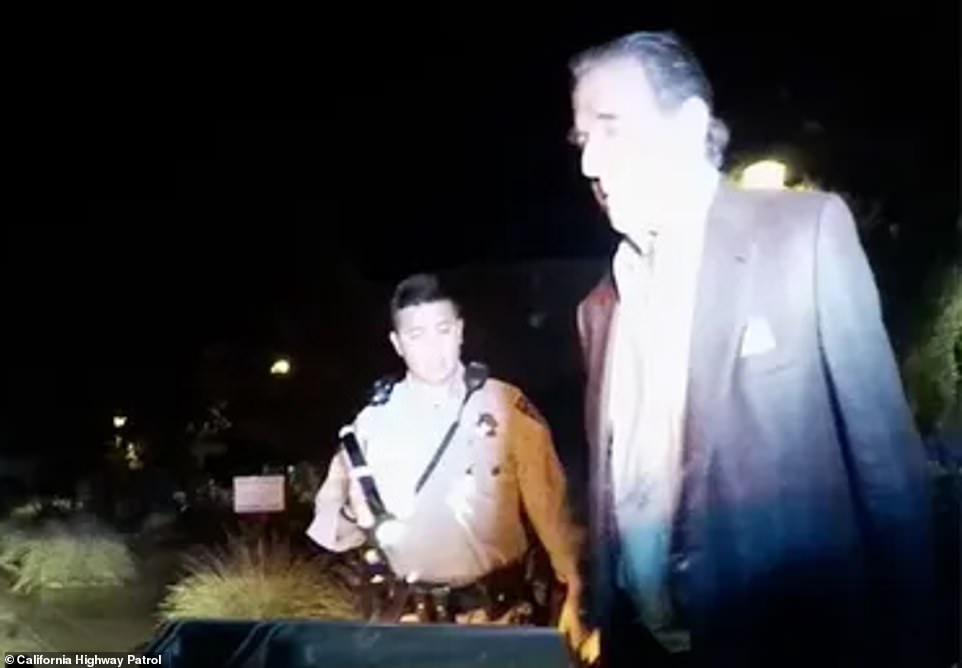 A bleary-eyed and wobbly Pelosi could be seen, above, in the immediate aftermath of his drunk car crash from May of this year

Paul could also be seen lurking in the background of some of the pictures, looking far more sober than in his May mugshot, where he appeared glassy-eyed.

At the time of the crash, Nancy Pelosi was on official business in Rhode Island and swiftly distanced herself from the incident.

Paul had been at a dinner with friends prior to the crash and was driving back to his palatial vineyard home.

At the time of the crash, he was attempting to cross State Road 29 – a busy highway that connects Napa and Calistoga – when he slammed into a 2014 Jeep driven by Jesus Lopez, 48. 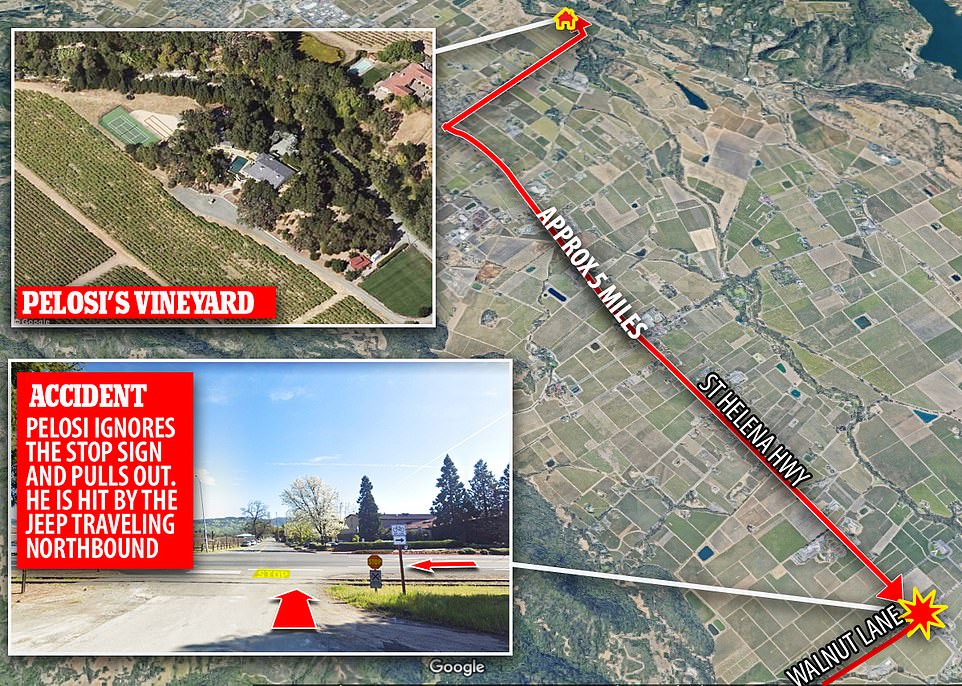 At the time of the crash on May 28, Pelosi was attempting to cross State Road 29 – a busy highway connecting Napa and Calistoga – when he slammed into a 2014 Jeep driven by Jesus Lopez at 10:22pm. He had pulled out of Walnut Lane, five miles south of his home with Nancy

The development comes after DailyMail.com revealed Pelosi was involved in a smash that killed his brother David when he was 16. Pelosi’s accident made news at the time. The San Francisco Examiner reported it on Page 6 in its February 23, 1957 edition saying David had warned Paul to slow down

Earlier this year, DailyMail.com revealed Pelosi has a history of driving incidents and was involved in a crash that killed his brother, David, when he was 16.

According to a 1957 report in the San Francisco Examiner, Pelosi, who was then a high school sophomore, had collected David, 19, from the home of a girlfriend at 12:30 a.m. and the brothers had decided to take a ‘joy ride.’

The fatal crash happened shortly after 2:40 a.m. close to the Crystal Springs Dam just outside of San Mateo and left David trapped under the car where he was throttled by his neck brace.

Although a coroner’s jury later dismissed manslaughter charges against Pelosi, a patrolman quoted in contemporary news reports said David had told his brother to slow down seconds before the crash.

He said: ‘This is a bad stretch – better slow down,’ as they approached a tight curve near the Crystal Springs Dam on the Skyline Highway – now California State Route 35.

Paul told Patrolman Thomas Ganley he tried to slow by shifting gears in the stick shift car, but lost control.

‘The car veered across the road, bounced back from a small embankment, climbed 20 feet up another, spun around and somersaulted simultaneously and ended upside down on the shoulder with both youths underneath,’ reported the Examiner.

David, a freshman at the College of San Mateo, was dead on arrival at the hospital.

The newspaper said David was probably strangled by a brace he wore to support a neck fracture he had sustained when he dived into shallow water in Lake Tahoe.

The San Mateo Times reported that Ganley and another patrolman Jack Rakestraw noted that David’s brace was ‘lodged tightly against his neck’.

‘They jacked up the car to relieve the pressure but the youth apparently was already dead,’ the Times reported.

Paul Pelosi broke his collarbone in the crash and was trapped under the car for a while. He managed to free himself and call for aid. 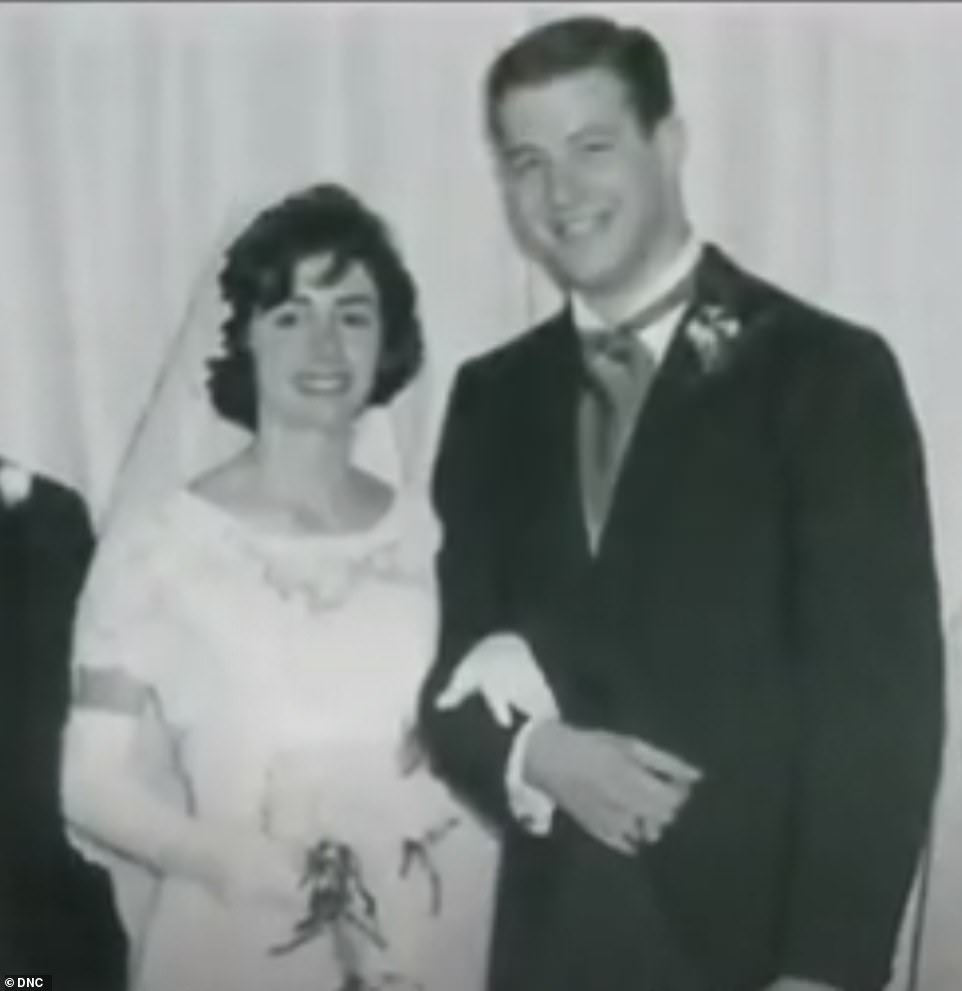 Paul Pelosi married Nancy D’Alesandro in the Cathedral of Mary Our Queen in Baltimore on September 7, 1963

More recently, Pelosi has been cited twice- both times in 2011 – once for running a red light and once for veering over the center line while driving.

She took his last name and went on to be elected to Congress in 1987 and then became the first female speaker of the House of Representatives.

Saturday’s outing at the Global Citizens Festival comes just two days after Pelosi dodged a question about whether or not President Joe Biden should run for re-election in 2024. 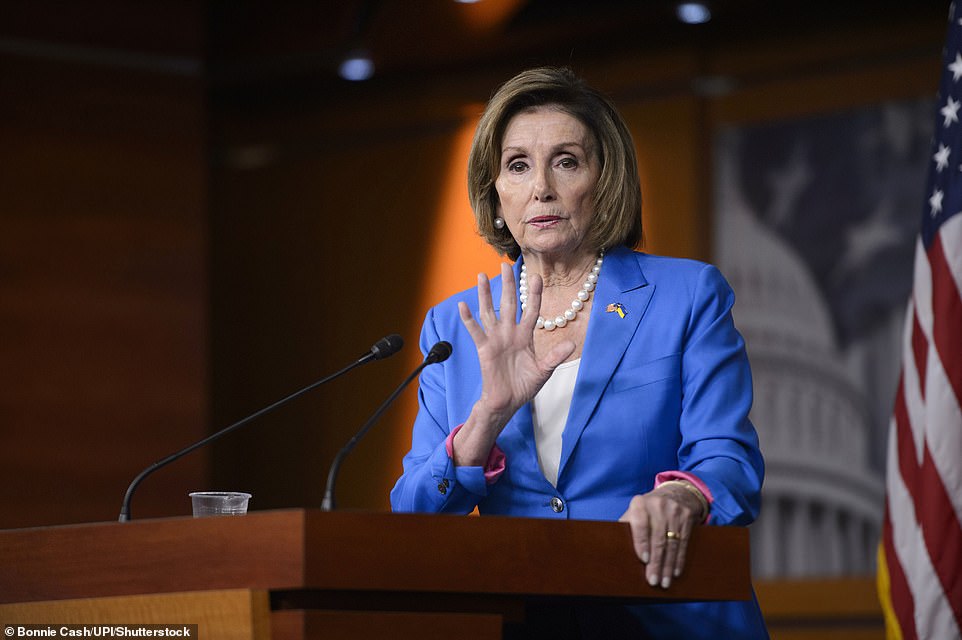 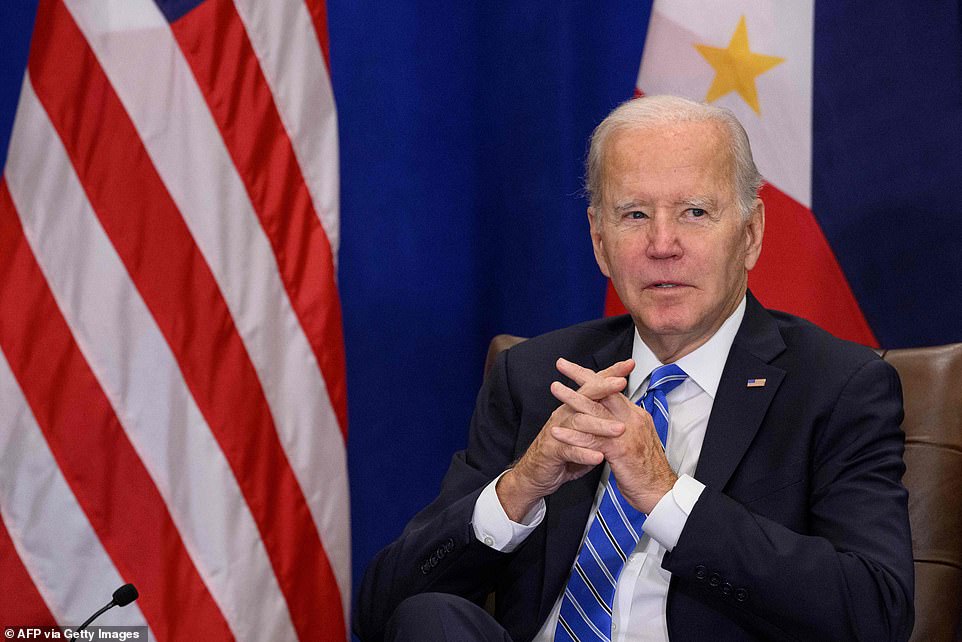 Pelosi is the latest Democrat to hedge on whether Biden, photographed at the U.N. General Assembly Thursday, should appear at the top of the ticket in two years

‘I’m not going to get into the politics about whether the president should run or not,’ the top House Democrat told reporters at her weekly press conference.

Before refusing to outright endorse another Biden run, she said: ‘President Biden is the president of the United States.’

‘He did a great service to our country. He defeated Donald Trump. Let’s not forget that,’ she continued. ‘If you care about the water we breathe, the water we drink, the education of our children, jobs for their families, pensions for their seniors – any subject you can name.’

‘My hunch is that we need new leadership across the board – Democrats, Republicans, I think it’s time for a generational move,’ Ryan said earlier this month at an Ohio event headlined by the president.

‘The president said from the very beginning he was going to be a bridge to the next generation, which is basically what I was saying,’ Ryan told the White House pool, clarifying his earlier comments.

The Global Citizen Festival made its return on Saturday with shows in both New York City and Accra, Ghana.

And Priyanka Chopra, 40, and husband Nick Jonas, 30, shared a kiss while on stage at the 10th annual Global Citizen concert in New York’s Central Park.

The married pair packed on the PDA while front-and-centre at the star-studded event, and dressed in colourful suits for the occasion. 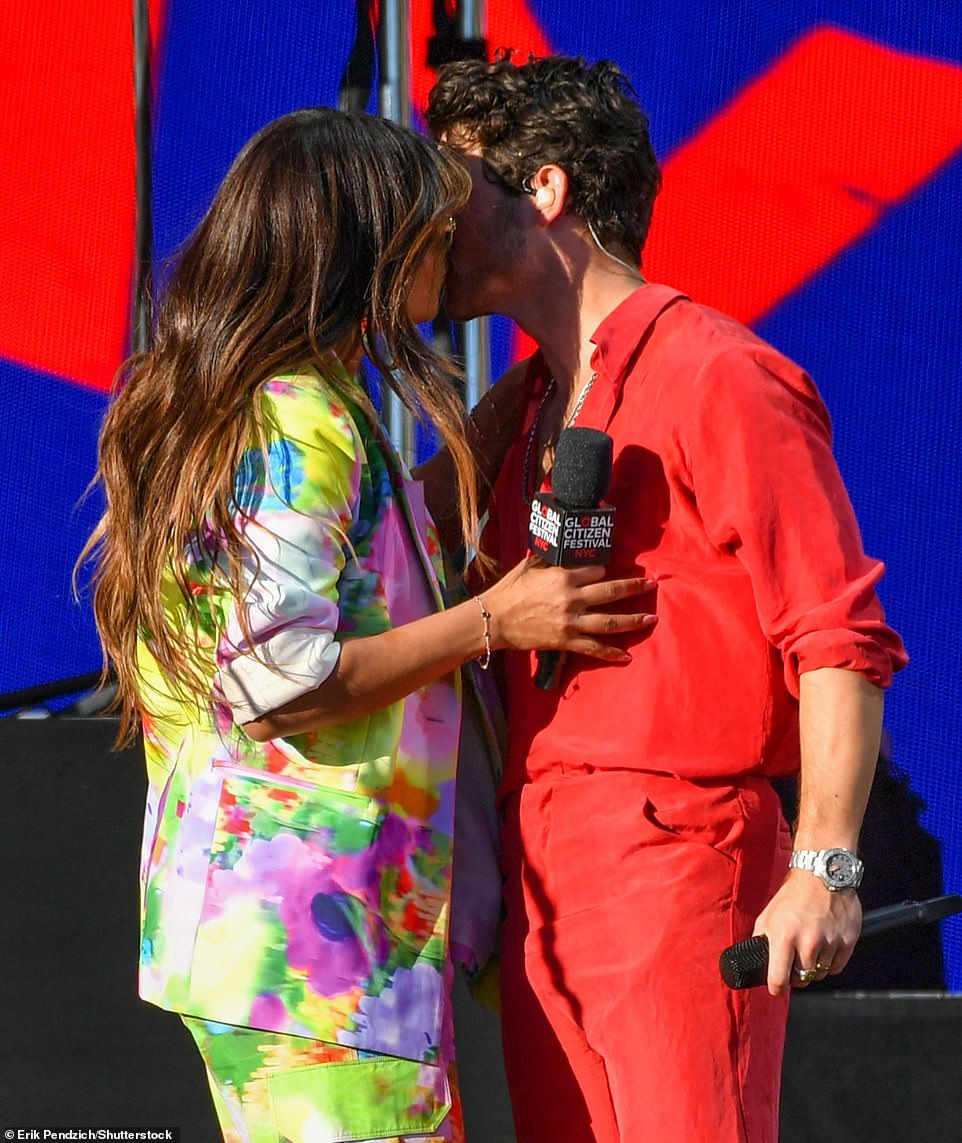 Priyanka commanded attention in a two-piece co-ord that had a multicolor abstract floral design throughout.

Her look consisted of a structured blazer jacket and matching pants that had chunky cargo-style pockets along the legs.

She rolled the sleeves and teased her tummy with a cropped white and red Global Citizen t-shirt styled underneath her outer layer.

The Indian-born actress and entrepreneur rounded out the look with a pair of classic and clean white Nike Air Force 1 sneakers. 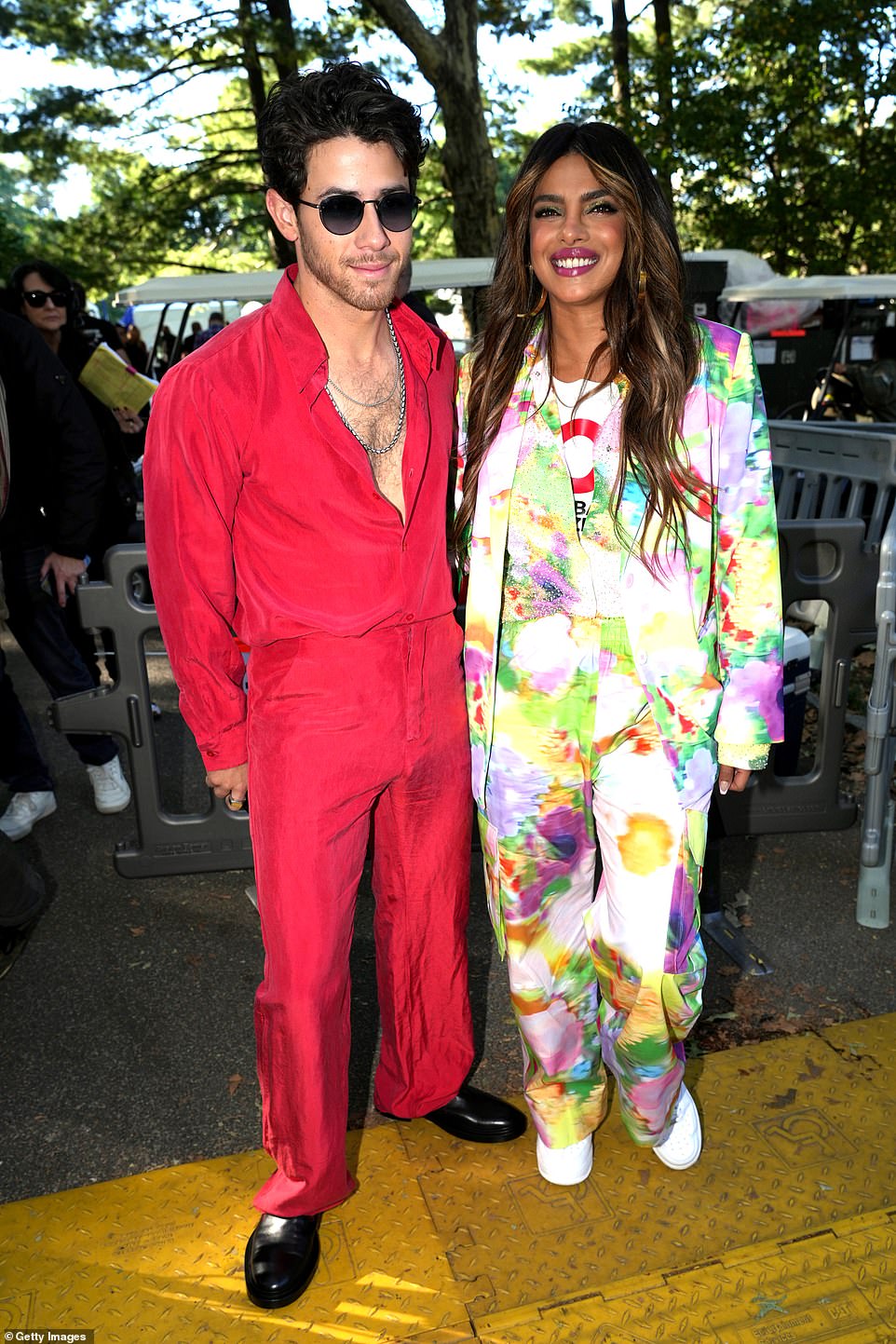 Striking! The married pair packed on the PDA while front-and-centre at the star-studded event, and dressed in colourful suits for the occasion 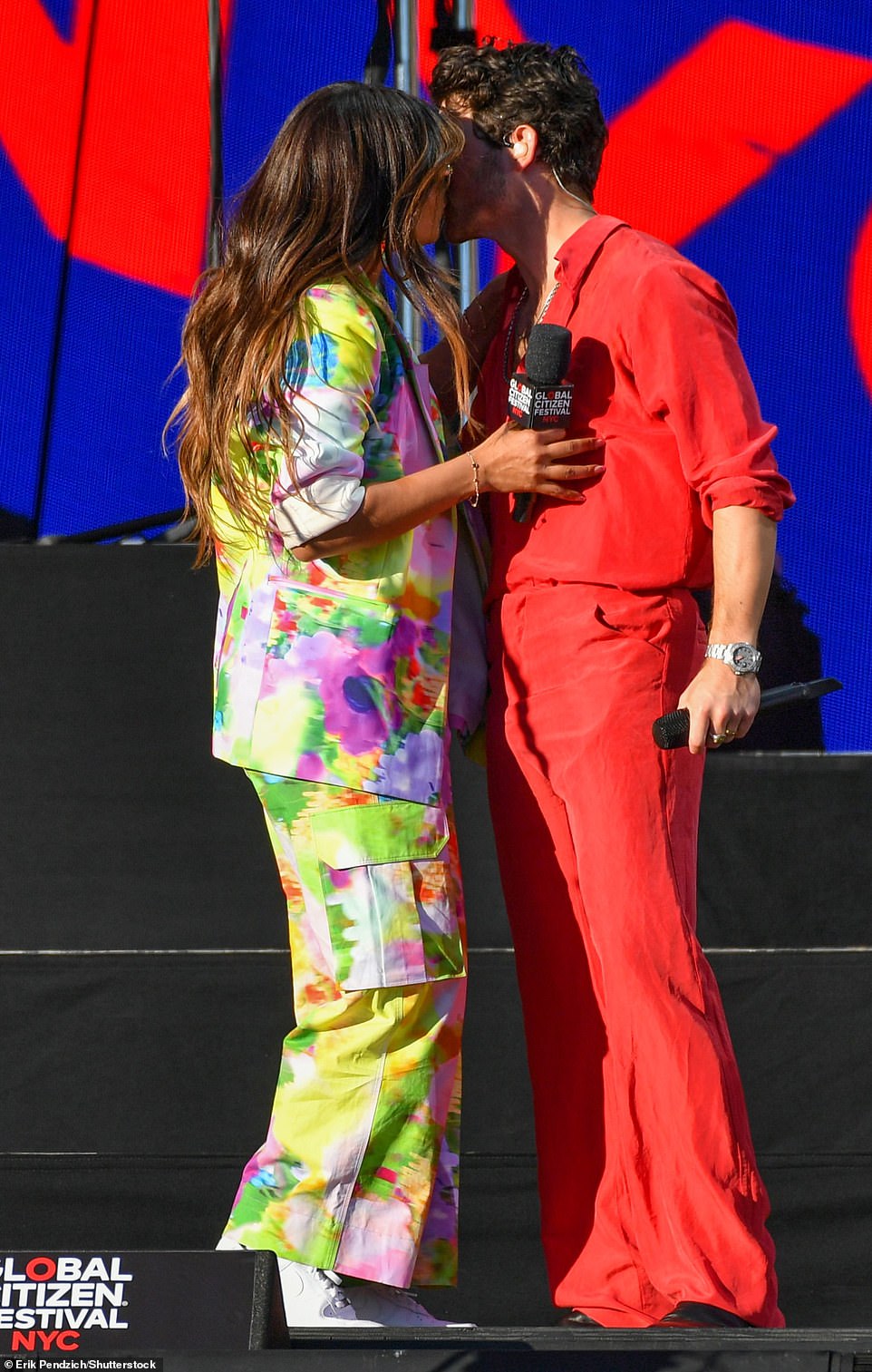 Loved-up: The lovebirds, who share a baby daughter named Malti who they welcomed via surrogate, shared a sweet kiss together onstage 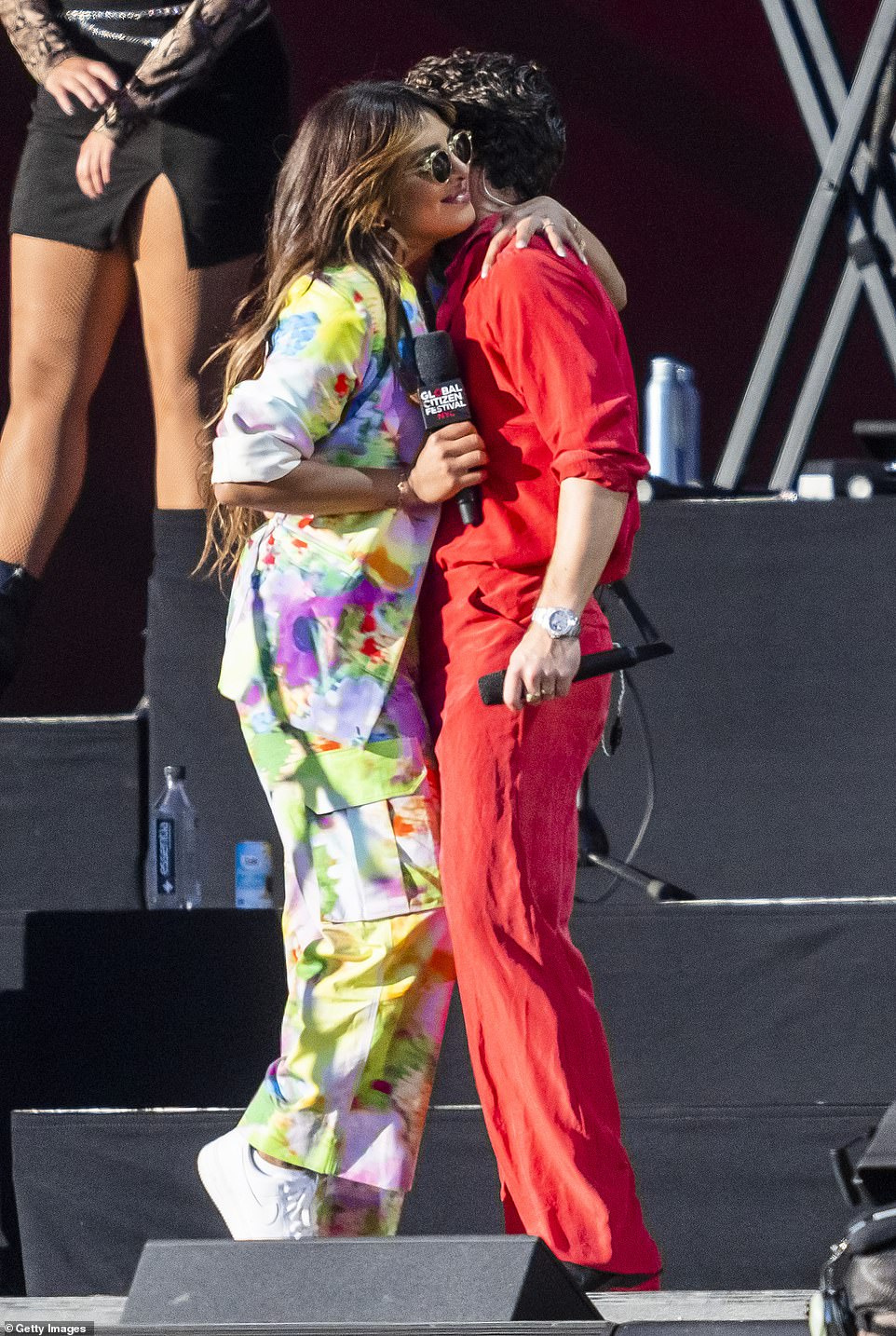 Cute: Priyanka commanded attention in a two-piece co-ord that had a multicolor abstract floral design throughout

The Quantico star wore her lengthy, highlighted locks down, letting them fall down her back in sultry waves that were styled in a middle part.

Face-framing layers were curled outward, keeping her view unobstructed as she kept the audience engaged with fellow superstars joining her at different moments.

The musician donned a button-up shirt that he tucked into a pair of slacks, taking a style cue from his bride and also rolling up his sleeves. 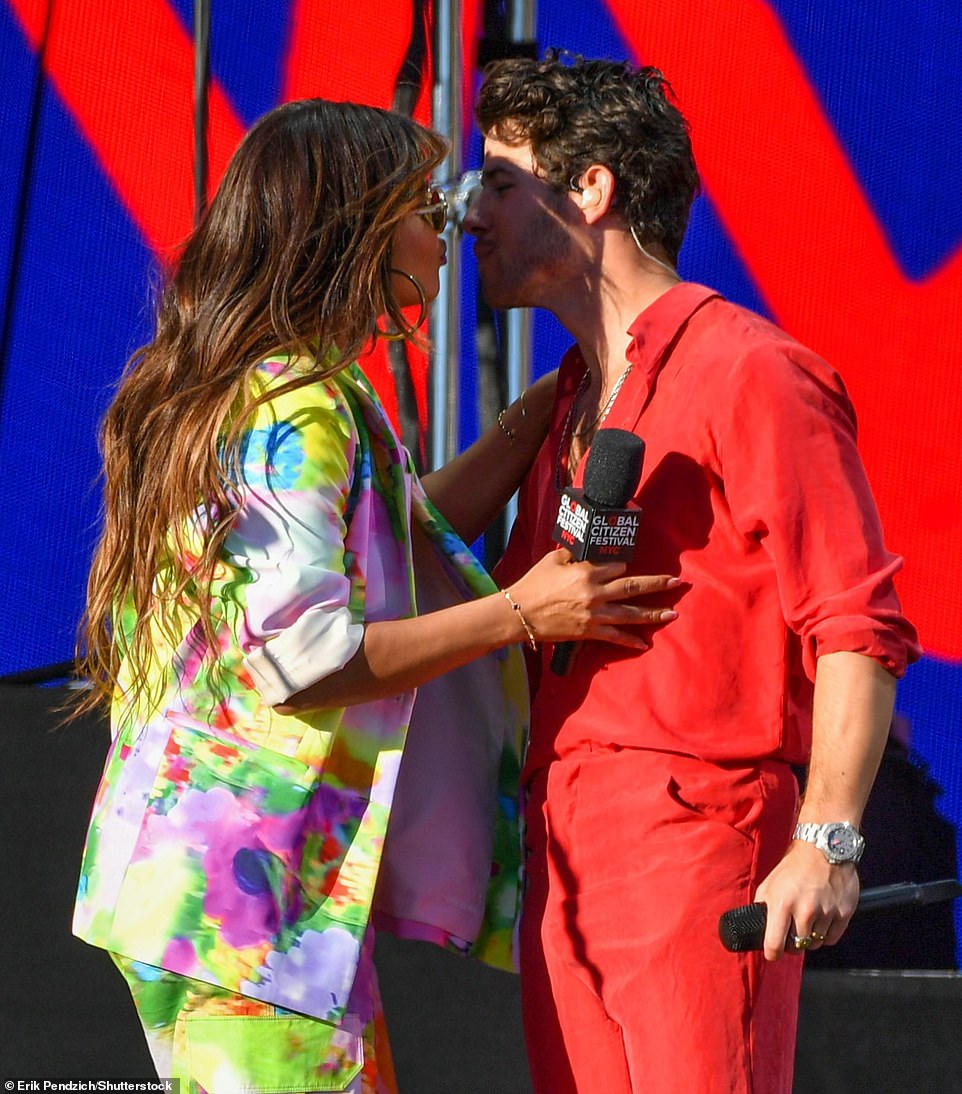 Kiss kiss: The couple puckered up while on stage at the featival 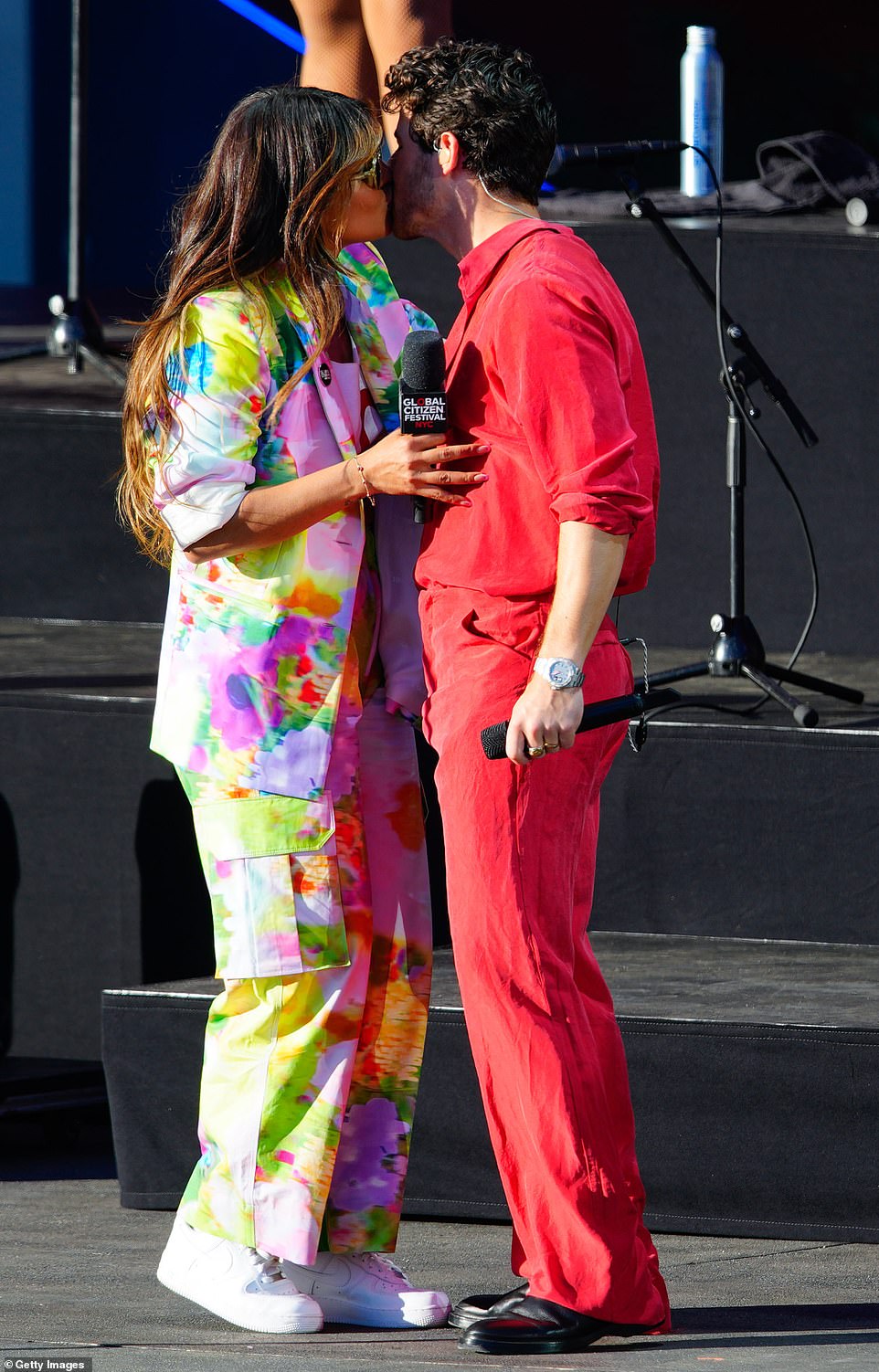 Love: Priyanka and Nick were happy to display their affections in front of the crowds

And the lovebirds, who share a baby daughter named Malti who they welcomed via surrogate, shared a sweet kiss together onstage.

The Global Citizen Festival is a yearly performance of music artists that dates back to 2012.

The production brings together ‘Global Citizens, artists, activists, world leaders, philanthropists, and corporate leaders,’ according to the official website.

It is strategically planned to take place at the same time as the UN General Assembly, with a commitment to end extreme poverty.