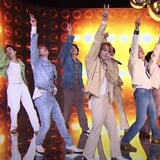 BTS‘ song “Permission to Dance” is guaranteed to make you smile! Jin, Suga, J-Hope, RM, Jimin, V and Jungkook appeared on The late late show with James Corden on Tuesday and gave an energetic performance. And of course they treated the fans to a great dance routine! The boy band also winked at fans of The Army around the world – in the background was a sign with directions to Seoul, London, Moscow, San Francisco, Kenya, Paris and more. Watch the video above!

During their performance on The late late show, BTS celebrated their Grammy nomination for best pop duo/group performance for “Butter”. They also made Corden beg forgiveness from The Army after his controversial remarks in September. In case you missed it, the talk show host was nicknamed Papa Mochi on an episode of carpool karaoke in February 2020. However, fans called for him to remove the nickname from his Twitter account after he joked during an episode about BTS performing” Permission to Dance” out on the United Nations General Assembly.

“While a lot of people say why BTS is there, the world leaders have no choice but to take BTS seriously. BTS has one of the biggest ARMY on the planet. Historic moment. It’s actually the first time 15-year-old girls everywhere wished that they were Secretary General António Guterres,” he joked. On Tuesday, Corden did some rambling in an extended clip of The late late show to make up for the scandal. Watch BTS poll whether they forgive the talk show host or not!