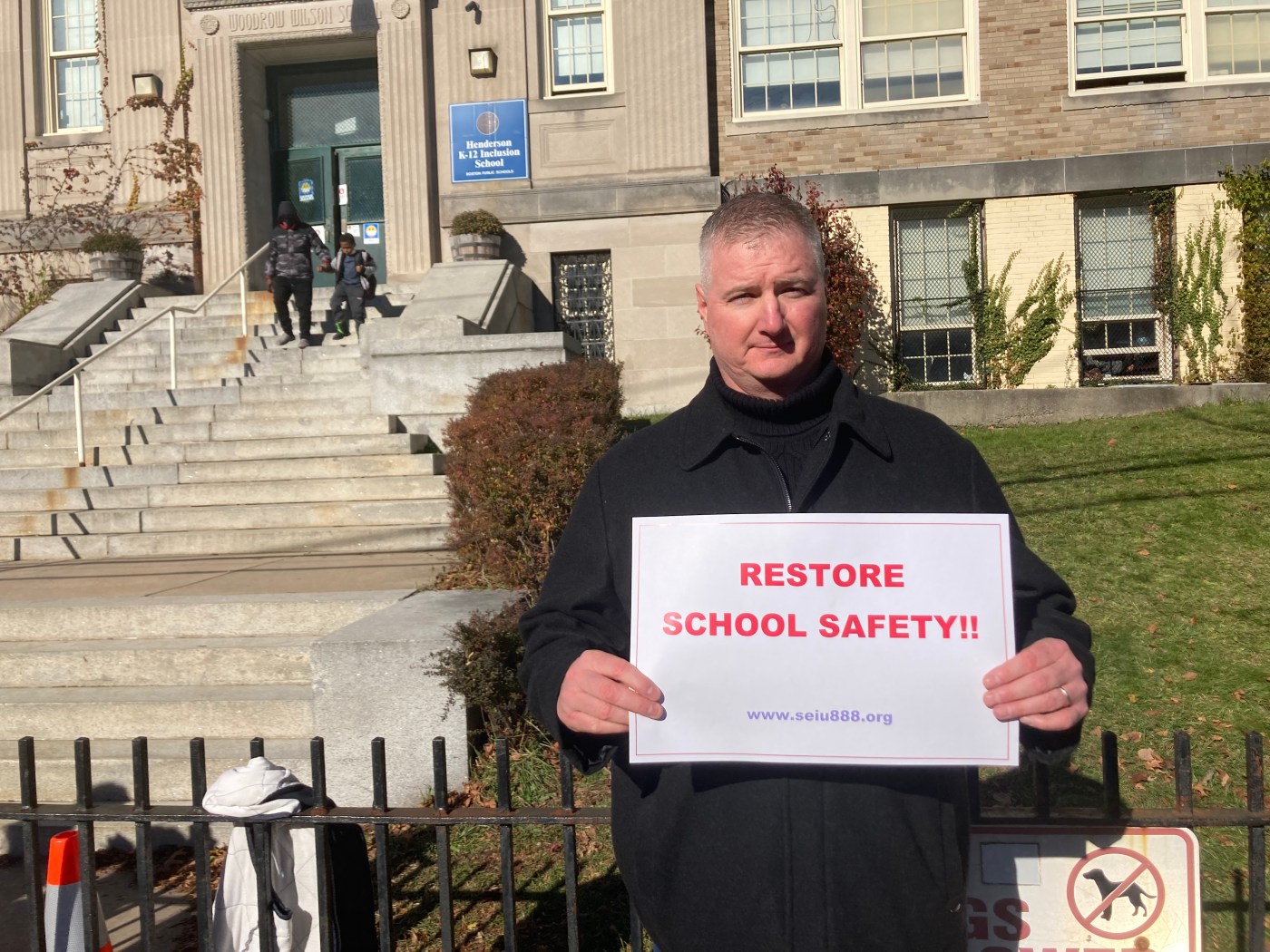 Security cameras and metal detectors are not being used at Henderson Inclusion School in Dorchester, according to SEIU Local 888 members urging the district to implement a security plan as daily fighting and threats of violence continue.

“There was a principal who gave her life to this school and was almost killed on the sidewalk here and no one is talking about that. No one is outraged about that,” said Boston City Councilman Frank Baker, who joined union members and other council members outside the school on Wednesday.

The principal of the school, Patricia Lampron, was attacked by a student earlier this month and knocked unconscious for several minutes, as previously reported by the Herald.

Tom McKeever, president of Local 888, said the security cameras at the school have been out of use for two years and the metal detectors have been disconnected and stored in a corner.

He said “several knives and tasers” were seized from students entering the school, and Baker added that fighting is a “daily occurrence”.

“It is unacceptable that the neighborhood has been radio silent on all these matters. We haven’t heard from them at all,” McKeever said.

A press release from Local 888 said that prior to the attack on Lampron, a union member who worked at the school had been threatened by the same student. That administrator is now on sick leave, according to Local 888.

McKeever and fellow union members are calling on Boston Public Schools Superintendent Brenda Cassellius for a comprehensive plan to increase security, improve security protocols and keep equipment like security cameras up to date.

Jonathan Palumbo, BPS spokesperson, could not confirm whether security cameras are in use at the school. When asked about metal detectors, he said, “They have been deployed in high schools and our instructions are that they should be used on a daily basis.”

“We want our staff and students to feel as safe as possible in our schools. And we want a quick response if something happens,” Palumbo said.

He said Lampron is resting and recovering at home. Palumbo said the district is actively seeking school security officials. The agents are not required to have a law enforcement background and are not allowed to get their hands on a student.

Since the attack BPS has implemented, among other things, a visible police presence, additional district personnel to monitor arrivals and discharges and advisory services.

Annissa Essaibi-George, councilor and chair of the education committee, said staff and families have expressed concern about the incident.

In an email obtained by the Herald through a request for public records, a parent of Henderson’s wrote to Cassellius that they had expelled their son from school two years ago due to ongoing behavioral problems, and cited violence and disrespect in older adults. students at the school.

“Our son did not feel safe there,” the parent wrote, adding that they fear for the safety of their younger children.

The Herald asks for more data from BPS on this matter, but has not yet received a response.

Send all BPS tips to alexi.cohan@bostonherald.com