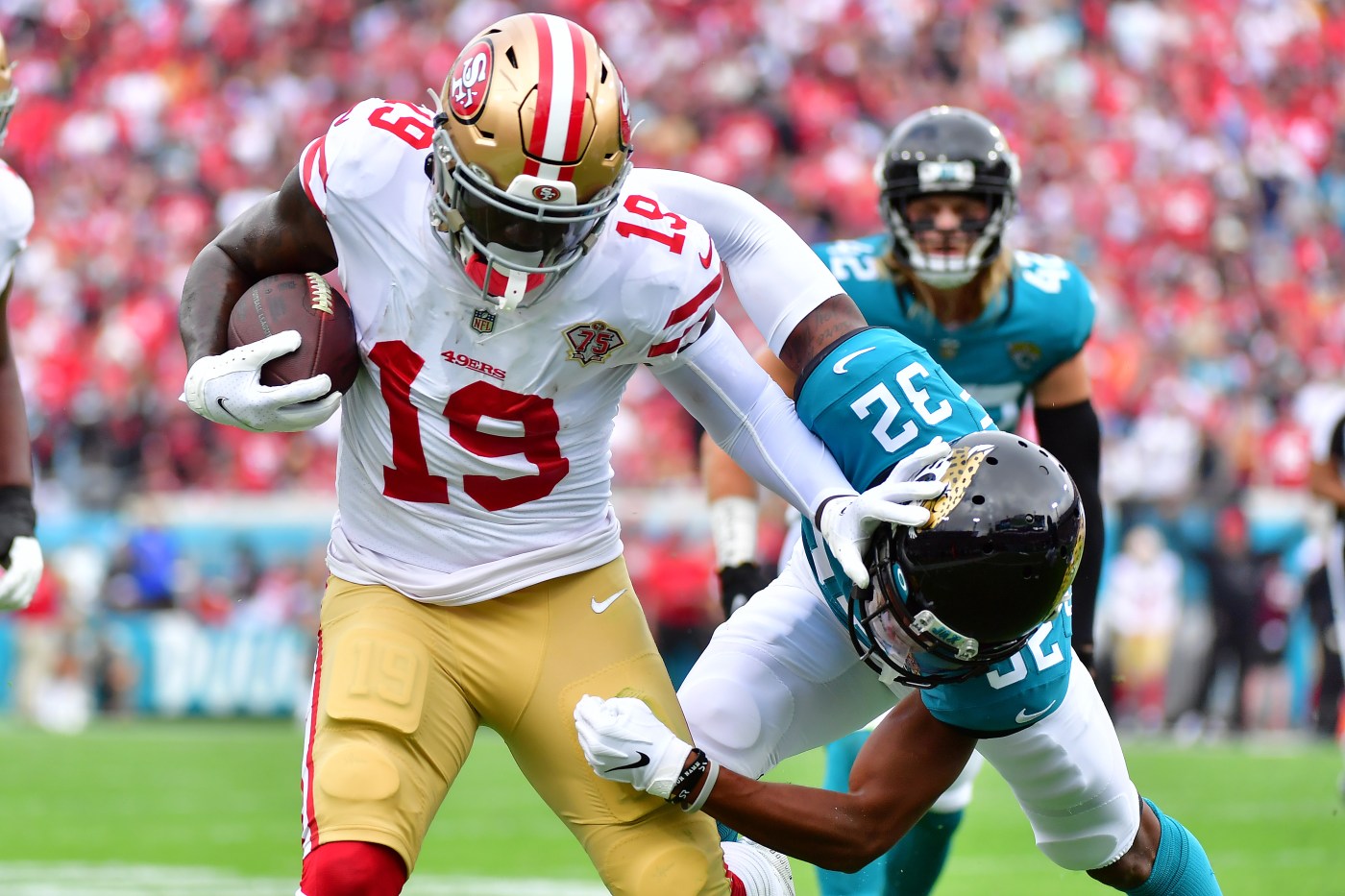 Forget cross-country jet lag. The 49ers woke up Sunday in Jacksonville and committed to a 20-3 lead over the Jaguars.

Here are some takeaways in the first half as the 49ers (4-5) look to win for the third time in four games:

DEEBO DOES IT AGAIN

Deebo Samuel came into play, taking just 21 yards to become the first 49ers’ wide receiver since 2014 to eclipse 1,000 yards in a season. He hasn’t gotten a pass yet.

However, he touched the ball five times, and it was all runs, marked by a 25-yard touchdown carry to the left pylon for a 10–0 lead 11:24 a.m. before halftime. Samuel split the lead blocks from Laken Tomlinson and George Kittle en route to his third fast landing this season.

Samuel has a team-high 47 rushing yards so far, and starter Jeff Wilson Jr. has 39 yards on 14 carries. Samuel only had six carry bags (22 yards) in the first eight games. Then came Monday night’s masterpiece with five carries for 36 yards.

His rush was called upon, in part because of injuries to the running back corps, from Raheem Mostert’s week 1 season end to the ailments that kept Elijah Mitchell (finger) and JaMycal Hasty (ankle) out of this game.

OK, a field goal wasn’t the sexiest result of an opening run of 20 games and 13 minutes. But it gave the 49ers the lead due to exhausting possession. How tiring?

On Thursday, 49ers safety Jimmie Ward gave insight into what a 20-play, 11-minute touchdown drive could have done for the Los Angeles Rams in the 49ers’ 31-10: “That can really hurt a defense for the entire game. It’s hard to get your legs back after being outside for 11 minutes.”

Well, the Jaguars defense was quickly back on the field when Trevor Lawrence went on the attack once in 1 1/2 minutes. The 49ers’ ensuing second heat began with Brandon Aiyuk rebounding from a tackle attempt and driving 34 yards into the Jaguars’ grounds, ending the first quarter.

Officially, Sunday’s opening run was 13 minutes and 5 seconds — the longest in the NFL since 2000, according to Fox Sports.

Jimmy Garoppolo and Aiyuk are a red-hot combination, and it paid off with a touchdown pass from the third and goal from the 6-yard line for a 17-0 lead.

Previously, Aiyuk had a 13-yard reception on a third-and-12 game, so it’s clear that Garoppolo and the 49ers trust him more and more to get out of a slump at the start of the season.

By the way, Garoppolo’s touchdown pass came from the shotgun, where it has thrived since the 49ers’ Halloween victory in Chicago. Of Garoppolo’s 14 passes this game, he has taken shotgun snaps on half of them (6-of-7, 87 yards).

Jauan Jennings has grown stronger after his rookie year in red shirt in place of injured No. 3 wide receiver Mohamed Sanu.

First, Jennings kept the 49ers’ opening drive by plunging into a fumble by Jeff Wilson Jr. on the Jaguars’ 16-yard line.

Midway through the second quarter, Jennings’ intensity led to the ejection of Jaguar’s safety Rayshawn Jenkins. With the 49ers ready to settle for a field goal (after Fred Warner’s recovery from Josh Norman’s forced fumble), Jenkins struggled with Jennings, who lost his helmet and was subsequently punched by Jenkins.