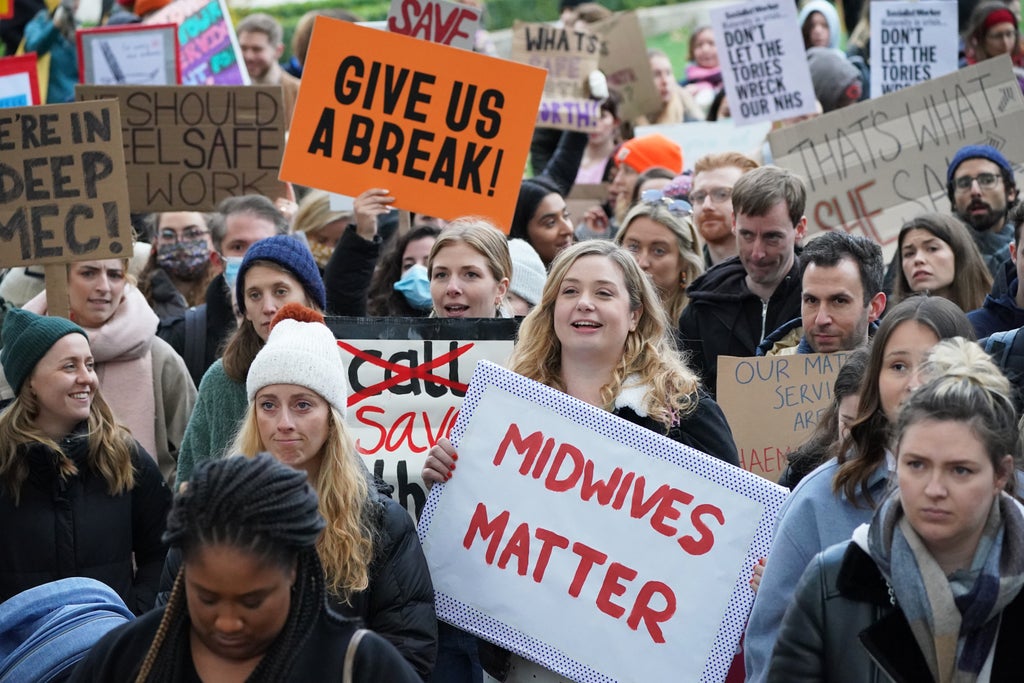 Maternity care is at a “breaking point” and the maternity care “crisis” must be addressed as a “national emergency,” midwives said.

The warning came as supporters of a March with Midwives campaign gathered in cities across much of the UK on Sunday to express concerns about staffing levels, working conditions and the state of services.

Midwives and families whose babies were born were among those who attended a wake in London Parliament Square appeal to the Government to take action now to address labor shortages and safety in maternity wards.

London-based obstetrician Sarah Muggleton, 27, spoke about the exhausting daily grind she has faced over her six-year career.

She told the crowd in central London: “I give every drop of my energy and emotion to hormonal and sometimes traumatized women, so when I get home I have nothing left to give to myself or my loved ones.

“I often have to skip lunch breaks as I work 12 and a half hour shifts to try and get the basic level of care required of me.

“I’m lucky that I can go to the toilet whenever I want.

“Don’t even start with the pay.”

She said the stress of her job can include caring for a bereaved child who has just given birth to a stillborn baby and then having to run to another delivery room where a woman gives birth to a live baby because there aren’t enough staff for the baby. required. -on-one concern.

Ms Muggleton added: “I know I am not being treated well and it is bad for my mental health.

“I know I have to leave, but I care about the women so much.”

She said: “Maternity care is now at a crisis point.

“We now have to make improvements.

“We are burned out and are now crying out for help.”

Work MP Bell Ribeiro-Addy described it as “a great shame”, the role of midwife does not seem to be appreciated enough.

After that, they will “go to work questioning the safety and the kind of service they provide to women and to giving birth to people,” she added.

Earlier this month, data from the Council for Nursing and Midwifery (NMC) showed that the number of nurses and midwives leaving the profession has risen.

Andrea Sutcliffe, NMC CEO and Registrar, warned that more departures could follow without further efforts to deal with the strain on both professions from the pandemic.

The NMC said the latest data shows that the total number of people leaving the registry for the most recent period rose for the first time in four years.

The organization’s semi-annual registration data report found that a total of 13,945 people left between April and September, compared to 11,020 in the same period last year.

The last time the total number of leavers was higher in the same six-month period was in 2017, according to the NMC.

The March with Midwives steering committee says childbirth in the UK is “becoming critically unsafe” and “this is a true national emergency affecting every level of society.”

Jon Skewes, of the Royal College of Midwives, referred to their own survey last month, which found that 57% of midwives are looking to leave and the largest group among them are those who have only been working for five years or less.

He said: “Maternity care has been under-staffed and under-resourced for years.

“NHS Trusts and Boards have relied on the goodwill of the staff and their genuine love for what they do to maintain the services, but the staff are reaching the end of their chain.”

A spokesperson for the Department of Health said: “We are committed to patient safety, eradicating avoidable harm and making the NHS the safest place in the world to give birth.

“Midwives are doing an incredibly important job and we know how challenging it has been for those working during the pandemic.

“There are now more midwives working in the NHS than ever before in history and we are aiming to hire 1,200 more with a £95 million recruitment campaign.