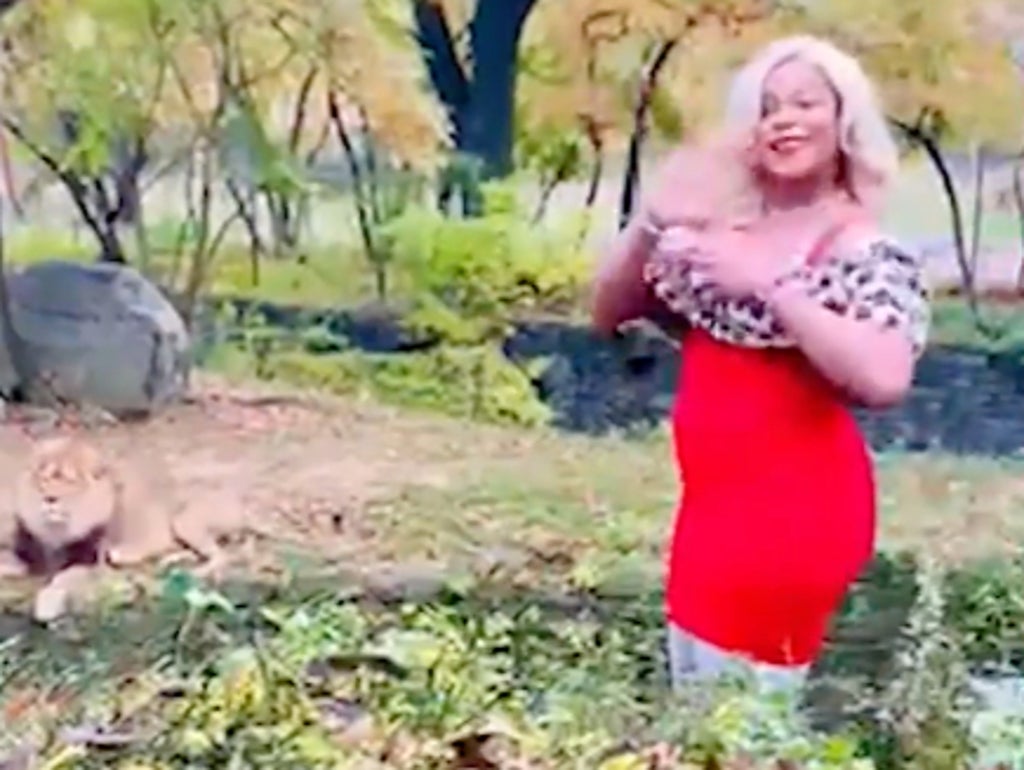 Police call for help in tracking down woman who was visiting New York‘s Bronx Zoo, climbed the barrier surrounding the lion’s enclosure and began to declare her love for the animals as she tossed $100 bills into the air last week, according to witnesses.

Police appealed to the public on Friday for help in finding the woman, the police said Associated Press.

NBC News Reports that the incident happened at about 4 p.m. on Thursday, with the woman exclaiming, “King, I love you, I came back for you!”

A statement from the zoo says that “staff were warned that a woman had stepped over a public barrier at the lion exhibit”.

“The incident lasted only a few minutes and the woman had already disappeared when staff arrived.”

Video taken by other zoo visitors shows the woman in a red slip dress and a leopard-print stole or scarf, waving bunches of roses at the “bewildered” lion.

She then began tossing $100 bills in the air and provocatively dancing in front of the beast, beating herself.

“I missed him so much”, the woman can be heard in the images.

A witness told the outlet that the woman also told the lion, “King, I love you, I came back for you.”

Although her behavior was bizarre, she was in no danger of being injured by the unimpressed-looking beast, because after the barrier, visitors are separated from the lions by a canal.

A similar incident happened two years ago when a woman named Myah Autry also climbed the barrier and danced in front of the lion.

Video footage and her comments suggest, and witnesses believe, that the woman was Mrs. Autry again on Thursday, but wearing a blonde wig, although this has not been verified.

When asked about her experience two years ago, Ms. Autry described it as “spiritual” at the time and told reporters that she was now the lion because of reincarnation.

She added that she was not afraid of the wild animal because it loved her: “That’s why he came to me and I let the lion know: Lion, I love you.”

Ms Autry was arrested on suspicion of criminal trespassing and had also entered the giraffes’ enclosure on the same day in 2019.

It is not known whether Mrs. Autry thinks she and the giraffes are in love with each other.

Zoo officials have said they plan to criminally prosecute the perpetrator of Thursday’s incident once the person is officially identified.